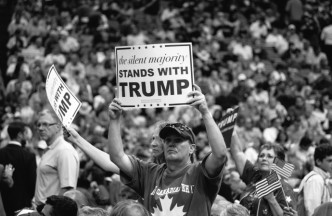 As Donald Trump makes it clear that he is intent on pursuing his rash and racist agenda come what may, we might be tempted to stand back, count our blessings and try to minimize the damage.

We need to be bolder than that. Not only in the short-term, as we counter his hyper-nationalist rhetoric, but also in our longer-term thinking.

The fact of Trump’s victory, like the Brexit vote and the rise of the extreme right in Europe should for us to rethink many of our policies today. How did we let this happen? This is the kind of question that was asked over and over again after the Second World War, as scholars and political leaders tried to understand how populations could elect fascist leaders.

This time around, we need to ask ourselves these questions before things get any worse, and be open to rethinking our policies in significant ways. And, like those political leaders who sought to build a better world after the Great Depression and World War II, this means thinking holistically about the political and economic lessons that we can draw today:

It’s far too easy to sit back and feel morally superior in the face of the growing racism and intolerance in the United States. We do moral superiority very well here in Canada. We played that card after the 2008 global financial crisis, and we’re quite likely to do it again. Yet, we need remember that Trump didn’t need (or get) a majority to be elected. He just needed enough support in the right places.

If we go back to the last Canadian election—or the current Conservative leadership race—we can find a lot of nasty, divisive rhetoric being bandied about. In fact, as Thomas Homer-Dixon argued very effectively, the debate about the niqab in Quebec played one of the most decisive roles in ensuring that the Liberals were elected, by making it clear that the NDP wouldn’t win Quebec, and allowing all of the anyone-but-Harper voters to coordinate their preferences around the Liberals.

That’s not a particularly strong mandate for smugness.

And that means that we have to work hard to make sure that we don’t go down the same xenophobic route that our American cousins are on right now.

There are no simplistic causal arrows linking the neoliberal economic policies of the past few decades to the rise of Trump, Brexit and the hard right in Europe—these events have complex origins.

Nonetheless, we would be foolish to ignore the parallels with the 1920s and 1930s, the last time in modern history that we saw the level of economic deregulation and inequality that we see today. The rise of fascism came hard on the heels of the Great Depression, making it abundantly clear to those who sought to rebuild after the Second World War that global and domestic political stability ultimately depend on economic stability and security—for everyone.

The results of those reflections were some of the most important changes in the way that we organize our economy on a global and domestic level, including the creation of multilateral financial institutions (the International Monetary Fund and World Bank—rather different creatures then than they are today), the regulation of financial flows, the development of the welfare state, and the broad commitment to full employment as the primary economic policy goal.

Fast-forward to today, and we find that many of the policies introduced in that post-war period have been eroded, dismantled or reversed. While the last few decades’ deregulatory binge may have afforded us a measure of economic growth, it was not without its costs. If the 2008 global financial crisis made the economic costs all too apparent, the rise of intolerance and protectionism should make its political consequences very clear.

3) Reduce inequality, and work to build a dynamic and inclusive economy

As we seek to respond to the challenges of a newly protectionist US and a still-lackluster economic recovery, we need to see the reduction of inequality and the creation of an inclusive economy as a key priority—not a luxury.

This means that we need to do better than we have in the recent past, when the Canadian government has given in too quickly to external pressures and accepted greater inequality as a necessary cost of economic survival.

The Conservative government’s response to the 2008 global financial crisis is a case in point, as stimulus measures gave way to austerity far too quickly (even in the face of IMF recommendations to the contrary).

The Chrétien Liberal government made a similar mistake, in the mid-1990s, when they found themselves at the mercy of bond markets that believed that the Canadian debt was too high and cut social transfers so severely that they started us on the current trend towards growing inequality.

Today, we know that the supposed trade-off between equality and growth is an illusion. There is a great deal of research out there that shows that inequality is bad for growth, and that reducing inequality can make growth oriented policies much more effective.

4) Prepare for the next crisis

When the next recession hits (as it is very likely to do in the next four years), the odds are that we will find ourselves in real difficulty. With our conventional monetary policy tools already mostly tapped out, and Canadian consumer debt levels at an all-time high, the pain of the next recession is likely to be more widely felt (as it was in the US and the UK last time).

Combine that with the kind of xenophobic rhetoric that we’re seeing in the current Conservative leadership campaign, and the risks of a rise of intolerance here is very real.

Which is why that we need to take the political and economic lessons from Trump’s election very seriously indeed, and start to think more creatively, bravely and inclusively about the kind of inclusive society that we can build in Canada.

This blog was originally posted on the CIPS blog.

I am a Professor in the School of Political Studies at the University of Ottawa. View all posts by Jacqueline Best